The Thursday Evening Reception is Dec 12th at the Wagner Noel Performing Arts Center. The event is open to the general public at no cost.  Registration is requested at  Register Here: 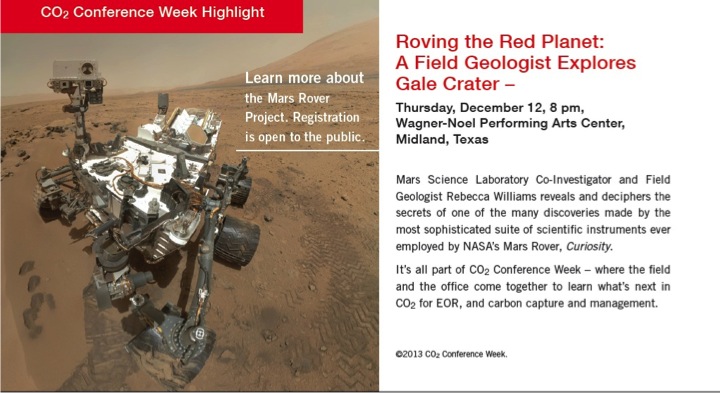 On August 5, 2012, the Mars Science Laboratory rover Curiosity landed in northwest Gale Crater. The landing site is on plains next to the ~5 km high Mount Sharp and near an alluvial fan. With the most sophisticated suite of scientific instruments ever employed to investigate the Martian surface, Curiosity has been assessing the character of ancient environments based on the development of facies models derived from sedimentary rocks almost 4 billion years old. As a co-investigator on this mission, Dr. Rebecca Williams uses her experience as a field geologist to aid the science team in reconstructing the geologic history preserved at Gale Crater. Terrestrial crater analogs have been particularly useful in deciphering the initial photographic and geochemical results in Gale Crater. In her presentation, Dr. Williams will discuss the rationale for selecting this landing site, will update us on rover activities and science results after fourteen months of surface operations, on the excitement of learning more about our sister planet, and provide insight into how the science team participates in daily operations from their home institutions.

Speaker Bio: Rebecca M. E. Williams received her BA in 1995 from Franklin & Marshall College. She earned her Ph.D. in planetary science from Washington University in St. Louis in 2000. She is a senior scientist at the Planetary Science Institute. The overarching objective in her research is to understand the role of water in shaping the surface of Mars through qualitative and quantitative characterization of landforms using image and topographic datasets. Her research builds upon field observations of terrestrial fluvial landforms to enhance the interpretation of remotely sensed data from Mars. One of her research topics has been on investigating inverted channels in Utah, California, Australia, and Chile. She has served in the role of principal investigator in seven NASA-funded projects and as a team member with the MOC, CTX and THEMIS VIS cameras. In 2006, she was awarded the NASA Carl Sagan Fellowship for Early Career Researchers. She lives in Waunakee, WI, with her husband, Scott, and their two daughters.